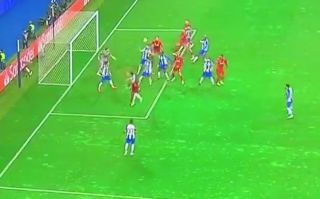 Liverpool secured their place in the Champions League semi-finals with ease after a 4-1 win at Porto on Wednesday night.

The Merseyside giants went into the encounter with a two-goal cushion from the first leg at Anfield last week, and after a slow start, they found their way in the final third.

Goals from Sadio Mane, Mohamed Salah and Roberto Firmino put them in complete control with a string of away goals as Eder Militao hit back for the hosts.

However, Van Dijk had the last word as he nodded home a simple finish after Mane had flicked on a corner, as seen in the video below.

The 27-year-old has now bagged five goals this season, with Liverpool securing their place in the semi-finals where they will face Barcelona.

Photo: Liverpool star Virgil van Dijk spotted with the national team as he entertains the subs at half-time vs Scotland