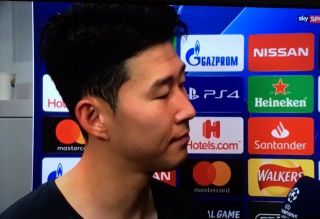 Heung-Min Son emerged as one of Tottenham’s heroes on Wednesday night as they eliminated Man City to advance to the Champions League semi-finals.

The 26-year-old scored a quick-fire double in the first half to stun the Etihad after Raheem Sterling’s early opener, with Spurs eventually securing their place in the last four after the tie finished 4-4 on aggregate, as they advance on the away goal rule.

There was a blow for Mauricio Pochettino and his men though, as after picking up a booking in the thriller in Manchester, Son will now be suspended for the first leg against Ajax.

Given the South Korean international has bagged 20 goals and 10 assists in 42 appearances so far this season, he’ll be a huge absence for Tottenham.

Coupled with the fact that Harry Kane is already sidelined with an ankle injury, and it’s really not what Pochettino needed in preparation for that game.

To make matters, Son was informed about it during a live interview with Sky Sports Germany, as it’s reported that he wasn’t aware of the ban and only found out after being told by the interviewer, as seen in the tweet below.

It’s a heartbreaking way for him to find out as ultimately he will be bitterly disappointed, but having played a key role in getting Tottenham to the semi-finals, he’ll hope that he can make a big impact in the second leg and help them secure a place in the final in Madrid next month.

Given the way in which Spurs have seen others step up after setbacks though with Lucas Moura scoring a hat-trick in the win over Huddersfield last weekend, they’ll still be confident that they can get a positive result in the first encounter with Ajax.

Heung-Min Son informed on German TV that he’s out suspended for the semi-final first leg.

OFFICIAL: Son Heung-min will now miss the first leg of the #UCL semi-final should Spurs qualify following a booking against Man City. pic.twitter.com/Hkb4sCfv5s