Chelsea boss Maurizio Sarri was absent from a press conference on Wednesday after undergoing a ‘minor medical procedure’ on a dental problem.

The Blues are gearing up for a Europa League quarterfinal second leg against Slavia Prague at Stamford Bridge this evening, holding a 1-0 advantage from the first leg in the Czech Republic.

The competition represents Chelsea’s only remaining chance of silverware this season and it might also be their best route to qualification for next year’s Champions League.

However, Sarri was forced to miss the pre-match press conference after requiring a ‘minor medical procedure’ which left him unable to communicate properly – as per The Sun.

The Italian boss reportedly had a dental issue, but the club has confirmed he will be in the dugout for Chelsea on Thursday night and in front of the camera before and after the game. 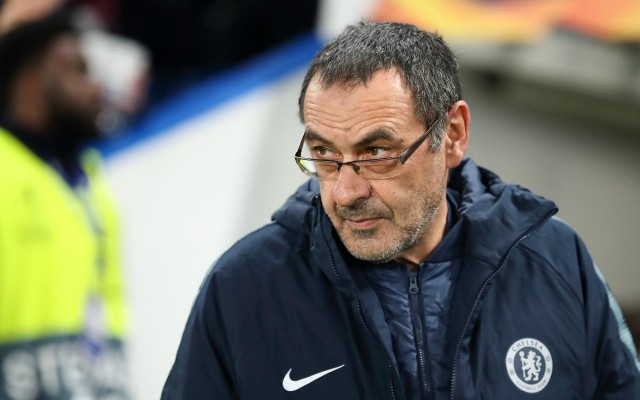 Sarri has endured a turbulent debut season at the Bridge, coming under heavy criticism for his stubborn tactics and rigid selection policy, while results have also taken a turn for the worst.

The Blues are currently fifth in the Premier League having played a game more than their top four rivals and thusly, the Europa League has taken on a greater significance.

Speaking ahead of Slavia Prague’s arrival in London, Sarri’s assistant Zola insisted that Chelsea are fully focused on progressing to the last four and complacency won’t be an issue against difficult opposition.

“We know from the first leg that this is a top opposition and we will not be taking them lightly,” Zola stated – as per The Sun.

“We will make a few forced changes but we will be putting out a strong team to ensure we progress.”

Chelsea have saved many of their best performances over the last 12 months for Europe, with Sarri willing to rotate his squad more freely and experiment with different attacking set-ups in the competition.

Another win will take his side one step closer to the promised land and perhaps ensure that his position at the club remains secure heading towards the end of the 2018-19 campaign.