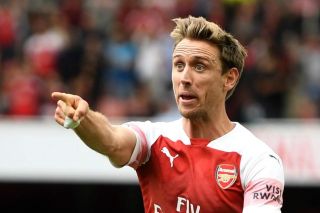 Arsenal were temporarily down to 10 men against Napoli on Thursday night, with Nacho Monreal seemingly going missing in the second half.

Fortunately for Unai Emery, his side were cruising towards the semi-finals of the Europa League as Alexandre Lacazette’s brilliant free-kick in the first half extended their lead to 3-0 on aggregate.

Although Napoli continued to push for a way back into the game, they were lacking any real cutting edge in the final third to worry Petr Cech and his defenders, and it ultimately led to the home crowd growing frustrated with their own players.

Such was their struggle to find a breakthrough against Arsenal, Monreal was able to disappear for a few minutes before returning to the pitch in the second half.

As noted in the tweets below, many Arsenal fans believe that they have the explanation for his absence, as they think the Spaniard may well have decided that he could afford to take a trip to the loo.

Luckily for him it didn’t cost the Gunners being a man down, with Napoli unable to take advantage of the situation to put any real pressure on Arsenal in the second half.

However, he probably won’t want to make a habit of doing it, as in a tighter situation it’s fair to say that Emery wouldn’t have been too impressed given he had half-time to get whatever it was he needed to do out the way.

The good news for Arsenal fans though is that they look firmly on course to advance to the semi-finals, with or without Monreal being on the pitch for the full 90 minutes.

Monreal really just went for a shit midway through a European quarter final and just walked back on the pitch like it was nothing. ???

Has Monreal just gone for a sh*t midway through the match? ?

So easy this that Monreal’s gone for a quick poo.

Did Monreal go for a dump

I hope Monreal washed his hands

Monreal fully went for a shit for five minutes and I didn’t even notice we were down to ten. Napoli getting schooled.

Monreal leaving the pitch to go for a shit, this is football heritage

Monreal going for a shit mid game, we are not serious

Koscielny made the game stop so he could tie his laces and Monreal left mid game for a shit. Arsenal are not serious.

Monreal just left the game to go for a mud and Napoli still need 4 goals. This is not a serious competition. Nobody has ever gone for a shit in the middle of a Champions League game.

Came running out of no where from the bench area ! Haha #arsenal

Nacho Monreal just left the pitch for a poo in Napoli game. Absolute disrespect in Naples ?