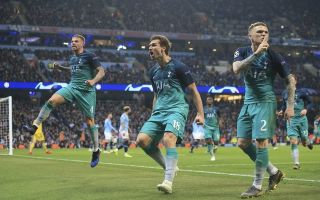 Tottenham’s hero against Manchester City last night, Fernando Llorente, has established himself as a Spurs legend after he liked a tweet mocking Arsenal’s performances in the Champions League following his side’s triumph at their new stadium.

Llorente scored the decisive goal in the Champions League Quarter-Final tie, the ball hit the back of the net after hitting the Spaniard’s arm, but the referee deemed that Llorente’s handball wasn’t deliberate and ruled the goal for Spurs after consulting with VAR.

Tottenham fans certainly wouldn’t have expected that Llorente would be their hero last night, this will likely go down as the Spaniard’s best moment since coming to play in England.

The tweet managed to rattle a large portion of Arsenal’s fanbase, the Gunners faithful will be hoping that Spurs don’t make it to the Champions League final, should Mauricio Pochettino’s side make it to the final in Madrid – Arsenal won’t hear the end of it from their noisy neighbours for some time.