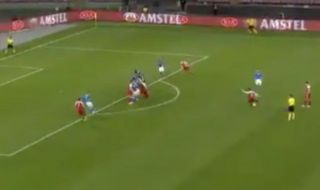 Arsenal took a big step towards the Europa League semi-finals after Alexandre Lacazette’s brilliant free-kick against Napoli on Thursday night.

The Gunners took a 2-0 lead to Italy after the first leg, and would have hoped to grab what would prove to be a crucial first goal in the encounter at the San Paolo.

While Napoli looked nervous in the early stages, they did begin to create good chances, but their hopes were dashed in the 35th minute as Lacazette stepped up and scored with a superb free-kick, as seen in the video below.

That puts Arsenal 3-0 ahead on aggregate with a crucial away goal, and so Unai Emery’s half-time team talk will undoubtedly have become a whole lot easier.

However, it wasn’t all positive news for Arsenal, as Aaron Ramsey limped off just minutes before the goal with a hamstring injury and so it remains to be seen how long he’ll now be sidelined for.

A HUGE goal for the Gunners! ?

Alexandre Lacazette fires in a free-kick from 30 yards!

Just what they were after ? pic.twitter.com/wSMSQFvjhu