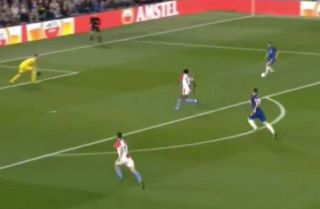 Chelsea were coasting at Stamford Bridge on Thursday night as they raced into a 3-0 lead over Slavia Prague after just 16 minutes.

The Blues already held a 1-0 advantage from the first leg, and they made short work of their opponents in the return fixture after continuously carving their defence apart.

As seen in the video below, it took just two passes for them to set up an easy finish for Olivier Giroud, with N’Golo Kante and Pedro both crucial in the build-up to the goal.

That’s now 10 goals in 11 games for Giroud in the Europa League, as while he has been left frustrated with a lack of playing time in the Premier League, he has certainly shown his quality in this competition to help Chelsea progress to what looks likely to be a place in the last four.

Pedro had broken the deadlock earlier on while an own goal doubled Chelsea’s lead soon after, and it would come as no surprise if they were able to add a few more to their tally before the night is over.

Giroud gets his goal!! Excellent ball from Kante to Pedro who puts it on a plate for Giroud. #CFC