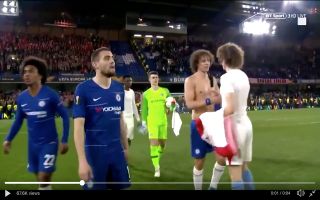 After the whistle blew for full-time, Luiz greeted his ‘twin’ and the pair embraced before they swapped shirts. Kral won’t forget this moment for some time, he can hang Luiz’s No.30 shirt with pride in his home.

Check out the hilarious moment after the final whistle below:

David Luiz congratulating himself after the final whistle. pic.twitter.com/otx5jDpFf0

Luiz’s twin put in a valiant effort tonight but it wasn’t enough to snatch a win against the Blues. Slavia Prague can be immensely proud of reaching the Quarter-Finals and their success this season doesn’t stop there, the side are currently top of the Czech Republic first division.