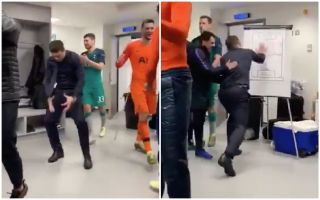 Tottenham secured their place in the Champions League semi-finals on Wednesday night, and Mauricio Pochettino was unsurprisingly delighted.

It came in dramatic fashion as their quarter-final tie with Manchester City ended 4-4 on aggregate, but Spurs go through on the away goal rule after a thrilling 4-3 defeat at the Etihad.

While the Argentine tactician was seen in jubilant mood on the touchline as he celebrated with his staff after the full-time whistle sounded, footage has emerged from the Tottenham dressing room after the game and it looks as though Pochettino was far from done with his celebrations.

As seen in the video below, the Spurs boss copies his compatriot Diego Simeone who landed himself in hot water with UEFA after making the gesture against Juventus in the last round, although the key difference here is that Pochettino did it in the dressing room away from the public.

In turn, it’s highly unlikely he’ll face any action over this and nor should he, as Tottenham now prepare to face City again this weekend in the Premier League, while they’ll take on Ajax in the Champions League semi-finals as their memorable European run goes on.