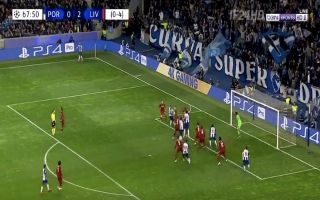 The Primeira Liga giants crashed out of Europe at the hands of the Reds after a 4-1 defeat at Estadio do Dragao, with Sadio Mane, Mohamed Salah, Roberto Firmino and Virgil van Dijk grabbing the goals for the visitors.

Jurgen Klopp’s men progressed 6-1 on aggregate having also won the first leg at Anfield 2-0 and they will now move on to face Barcelona in the last four.

There was, however, one bright spark for Porto on an otherwise disappointing evening, as Militao scored a bullet header in the 68th minute which flew past Liverpool goalkeeper Alisson and into the net.

Ahead of his summer switch to Real Madrid, the Brazilian also showed off his superb passing range early in the game, firing a 60-yard ball up to his colleague upfront to kickstart a Porto attack.

Check out both moments which will surely excite Madrid fans below, via Twitter.

This long ball by Militao is world class. pic.twitter.com/b3Z3j3RsYV