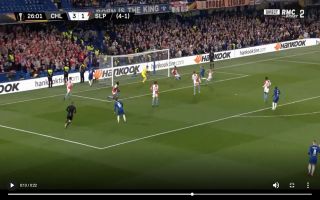 Chelsea winger Pedro has been central to everything that is happening for the Blues tonight, the star scored his second of the night to make it 4-1 vs Slavia Prague.

In the 27th minute of the tie, Pedro tapped the ball into the back of the net after some excellent work by Eden Hazard and Emerson on the left-wing.

Hazard played a superb pass into the path of Emerson and the Italian full-back fired a low cross into the box which was directed towards goal by Olivier Giroud, Giroud’s strike was parried away by the goalkeeper and Pedro tucked away the rebound.

Check out Pedro’s second and Chelsea’s fourth of the night below:

Pedro has been at the centre of attention for the Blues tonight, the Spaniard’s enjoying an action-packed game.