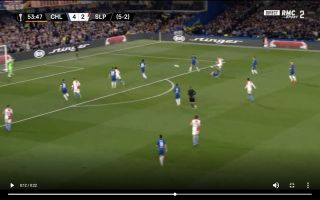 Chelsea certainly weren’t at the races after coming back onto the pitch after halftime, Slavia Prague scored a quick-fire double through Petr Sevcik.

Sevcik scored his first of the evening in the 51st minute of the match, Chelsea’s players stood off the Slavia midfielder when he was just outside the box and the 24-year-old tried his luck on goal and his effort managed to squeeze in at Kepa’s near post. The Spaniard could have done better to prevent the ball from hitting the back of the net.

Just three minutes later, Sevcik punished Chelsea for leaving him uncontested outside the box once again. The midfielder fired a sensational strike into the top corner.

Check out Sevcik’s goal below:

What a strike from Petr Sevcik ? pic.twitter.com/IxWO3hxMas

Some Chelsea fans blasted Kepa after he failed to save Sevcik’s first effort:

Kepa really is becoming dodgy at the moment….#cfc

He’s sh1t. Still stand by my “He should never play for the club after the League cup final” stance. 73mil your having a fxxking laugh. No better than Ross Turnball ?

Kepa is gonna be bombarded in future now, everyone knows his weakness. Hope he gets better.

I've always said we don't have a goalkeeper in Kepa…Dude is trash!!

Kepa disaster-class. Don't deserve to go through. We are pathetic. #SarriOUT

Players will be taking long range hits at Kepa for the rest of the season. Salah's goal doesn't even look special anymore.

The Blues have looked terrible since coming back from halftime, fortunately for them they still have a one-goal cushion over the Czech Republic side, should the tie end 5-5 – Slavia Prague will advance on away goals.