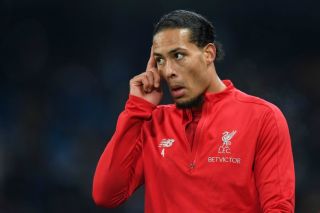 Liverpool will face Barcelona in the Champions League semi-finals next month, and a key to sealing a place in the Final will be to stop Lionel Messi.

The 31-year-old has been in majestic form yet again this season, scoring 45 goals and providing 21 assists in 42 appearances for the Catalan giants.

He was at his decisive best for Ernesto Valverde’s side in their second leg encounter with Man Utd this week, helping them to secure their place in the last four to face Liverpool.

In turn, while there are countless other world class individuals that Jurgen Klopp will have to prepare for, nullifying Messi’s threat as best as possible will undoubtedly be crucial to the outcome of the tie.

Van Dijk, who has become widely regarded as one of the top defenders in Europe, has insisted that it will take a team effort to shut Messi down, but conceded that he’s not quite sure on how they will go about it just yet.

“It’s about doing it all together, it’s never one vs one, it’s never just me against a particular striker.

“It’s always us against everyone and I think that’s the only way we can defend well.”

Liverpool face Cardiff City and Huddersfield before then as they look to secure the Premier League title this season, and so their focus will be elsewhere in the coming weeks.

Nevertheless, having conceded just 20 goals in 34 league games so far this season, their defence has been key to their success to this point, and so looking at it from a different perspective, it will be a major challenge for Messi and Barcelona to try and penetrate that backline too and book their place in the Final.