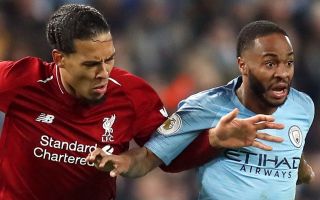 Raheem Sterling and Virgil van Dijk have been the standout players in this season’s Premier League and BOTH look set to be recognised with Player of the Year awards.

City winger Sterling has scored 17 goals and provided nine assists in 29 PL outings so far, while Van Dijk has lived up to his billing as the world’s most expensive centre-back by helping Liverpool boast the best defensive record in the division.

Liverpool have conceded just 20 goals in 34 games and kept 18 clean sheets. Van Dijk has also contributed at the other end of the pitch, with three goals and two assists.

With four weeks of action left to play, it remains unclear whether it will be Sterling’s City or Van Dijk’s Liverpool who lift the Premier League trophy.

But with most of the voting for the Player of the Year awards already done, The Times suggests that both players will likely have an individual prize to claim.

The Times reports that Van Dijk is expected to win the PFA award, voted for by his fellow players, while Sterling is apparently ahead in the voting for the prize organised by the Football Writers’ Association.