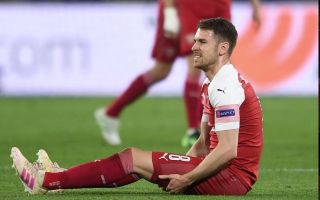 Arsenal secured one of their best results in recent years on Thursday night by winning 1-0 at Napoli to complete a 3-0 aggregate win in the Europa League quarter-finals.

But the victory came at a cost as star midfielder Aaron Ramsey, who scored the opening goal in the first leg, limped off early.

Ramsey appeared to injure his hamstring in Naples.

The Welshman has signed a pre-contract agreement with Juventus and will leave Arsenal this summer.

Arsenal have seven games left to play this season – eight if they beat Valencia to reach the Europa League final – and Ramsey could be unavailable for all of them.

Gunners manager Unai Emery was quoted by Reuters after Thursday’s game as saying: “It’s a muscular injury and usually it is going to mean some weeks outside the team.

“I don’t know if we’ll see him again before the end of the season.”

Arsenal’s final Premier League game takes place on May 12, while the Europa League final is scheduled to take place in Baku on May 29.

Ramsey has been one of Arsenal’s most influential players this season, scoring six goals and assisting seven more.

He has been an Arsenal player since 2008 when he arrived from Cardiff. He has racked up 369 appearances for the North London club in all competitions.