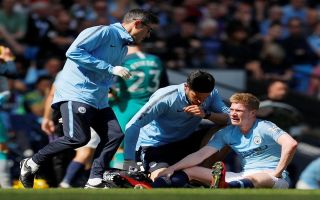 According to Mirror Football, City boss Guardiola ‘thinks’ that playmaker Kevin de Bruyne will be ruled out for the Citizens’ crucial clash against local rivals Manchester United on Wednesday night.

De Bruyne was forced off in the 38th minute of the clash, the Belgian ace injured himself after an attempt on goal. De Bruyne has been limited to just 18 appearances in the league this season because of his injury troubles and the star just looked as though he was back to his best.

De Bruyne was sensational in City’s exciting encounter vs Tottenham in the Champions League on Wednesday night, the 27-year-old produced a hat-trick of assists.

Here’s a list of the injuries that De Bruyne has suffered this season:

De Bruyne’s latest setback could have major implications in the title race, the star has the ability to provide the cutting edge and Guardiola will be hoping that his side can manage without the Belgian when they face off against their noisy neighbours on Wednesday.