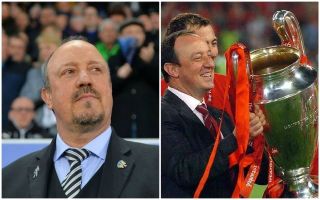 Newcastle United manager Rafa Benitez has threatened to leave the Magpies if the club fail to match his ambitions, the Spaniard wants to win the Champions League again before retiring.

According to the Daily Star, the Spaniard has set his sights on winning the Champions League again before retiring at the age of 70.

The Star report that Benitez is willing to sit it out and wait for the right club to achieve his ambitions should he fail to agree a new contract with Newcastle before the summer.

Time is ticking for the Magpies hierarchy to agree a new deal with the 59-year-old, Benitez’s contract on Tyneside is set to expire on June 30, according to the Chronicle Live.

Benitez lifted the Champions League with Liverpool in 2005 after the Reds pulled off an amazing comeback against AC Milan.

It’s understood that Benitez won’t commit to a new deal unless he is promised massive funds from Newcastle’s hierarchy, the Spaniard believes the Magpies should be aiming further up the league table and not solely on avoiding relegation.

Benitez’s ultimatum to the club could see the Magpies return to their former glory. Although there haven’t been any breakthroughs in contract negotiations as of yet, The Sun have reported that the club’s hierarchy will offer the Spaniard £100m to spend over two seasons, plus cash from player sales – should he pledge his future to the Toon.

Here’s what Benitez had to say, as per the Daily Star, on what he’d like to achieve before retirement:

“I like to and want to compete for trophies, and the best is the Champions League so I would like to have the possibility in the next 11 years to win it.

“What I want is to get a job that I can enjoy competing.

“If I cannot, maybe I have to stay at home and wait, I don’t know.”

Will Benitez remain at Newcastle or has his patience run thin with the club’s hierarchy?