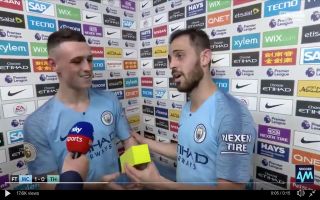 Pep Guardiola’s side managed to avenge the midweek heartbreak that they suffered against Tottenham, today’s win was crucial for the Citizens, they are now at the top of the league – with a one point lead over title rivals Liverpool.

Foden scored the decisive goal for his boyhood club in the fifth minute of the tie, the England youth international headed the ball into the back of the net after Bernardo Silva’s pinpoint cross to Sergio Aguero was headed across goal.

Foden would’ve thought that his day couldn’t of got any better but Silva made his teammate’s day even more memorable after he gave his Man of the Match award to the youngster.

Here’s the video of Silva handing his award to the youngster:

Great touch from Bernardo Silva giving his Man of the Match award to Phil Foden! ? pic.twitter.com/GdAvNpu3zB

Foden and Silva were both very impressive against Spurs today:

No wonder Silva is hailed by all of his teammates, the Portuguese star is a class act.

Video: Chelsea star told to “wake up” after being “awful” against Tottenham

Houssem Aouar Arsenal transfer to be completed on Friday; player in London for medical

Foden and Greenwood to pay a high price for breaking protocols with England September 30, 2020 10:24
Manchester City