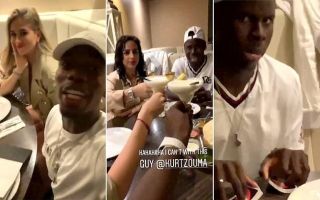 The pair have become close friends since they first met each other playing for France’s youth teams and went to dinner with their partners last night.

Pogba takes his Uno games very seriously and he even banned Zouma from his house after the Chelsea defender beat him at the popular card game:

Kurt Zouma: “[Pogba] doesn’t like to lose when we play card games, like Uno… The other day, I went to his house and beat him. He was so, so, so angry. He told me: ‘Don’t come anymore to my house.’ I said ‘My friend, please, it’s only Uno we’re talking about.’” [Goal]

Here’s the pair at dinner:

Pogba enjoying a night out with his baby, his partner and Kurt Zouma ? pic.twitter.com/D7HLX9wXdp

The pair are very close friends and Zouma joined Pogba and his brothers for Christmas celebrations last year:

United need to win against Everton on Sunday afternoon in order to keep their hopes of finishing in the top four alive, with the Red Devils being knocked out of the Champions League by Barcelona – finishing fourth in the league is the club’s only way of securing Champions League football next season.