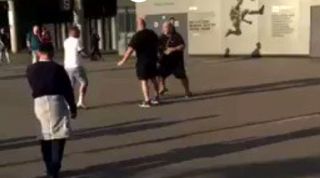 A bad day on the pitch for Arsenal turned into a mini civil war off it as a couple of their fans started to fight each other.

A Tottenham account uploaded a video of these two Gooners having to be separated outside the Emirates Stadium, shortly after their humiliating 3-2 home defeat to Crystal Palace.

This lot are embarrassing. ? pic.twitter.com/18umUnJhDS

Arsenal’s defending was all over the place against Palace, with Shkodran Mustafi particularly culpable on the Wilfried Zaha goal.

In a way, these two and their weak attempts at throwing punches at each other is somewhat reminiscent of the comical way Mustafi tried, and failed, to stop Zaha.