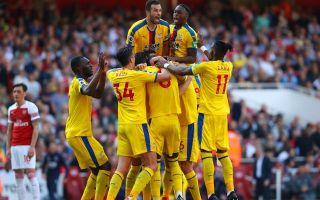 Arsenal fans are absolutely fuming at Shkodran Mustafi today as he somehow managed to make his reputation with the club’s support sink even lower.

The Gunners lost 3-2 at home to Crystal Palace, and Mustafi’s abysmal defending on the Wilfried Zaha goal is up there with his most comical moments in a red and white shirt.

The German centre-back looked a decent player at his previous club Valencia, but has been a spectacular flop for much of his Arsenal career.

It seems most Gooners are now really losing patience with Mustafi, as he’s the target of much of their anger after today’s poor result at home to Palace.

Arsenal had a big chance to make real progress in their pursuit of a top four spot today, with Manchester United and Tottenham both losing this weekend.

However, Mustafi almost single-handedly cost them with a dreadful performance when it mattered, and he’s now got this lot to answer to…

It has now become a Cliché for him to cost us important goals, points and even trophies at times.

Shame on the rest for not taking that HUGE opportunity today

I have watched Squillaci, Silvestre, Miguel, Andre Santos, Hoyte, Djourou, Traore and yet Mustafi manages to be the worst Arsenal defender of all time #shocking

I mean this is just fucking unacceptable. I honestly dont know which was worse, the Aguero tap last season or this ?????pic.twitter.com/AwYPWMhKro

Mustafi is the worst CB in the premier league. Massive opportunity missed today.

Mustafi is the worst defender to have worn an arsenal jersey.What a scam ?

United fans: Young is the worst defender in the league
Mustafi: Hold my schnitzel pic.twitter.com/fVuT7sWw0P