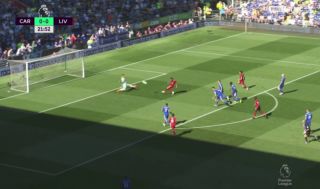 Roberto Firmino missed a sitter for Liverpool in their first half against Cardiff City in today’s Premier League clash.

The Brazil international was played in brilliantly after a fine flowing move by the Reds, but blazed over from close range when it looked easier to score.

? Will Roberto Firmino be kicking himself after this miss against Cardiff?

Watch more @PremierLeague clips and highlights in the @SkySports app. Download it here:

It ended up 0-0 at half time, with Liverpool surely unable to afford any more slip-ups between now and the end of the season as they chase a first title in 29 years.