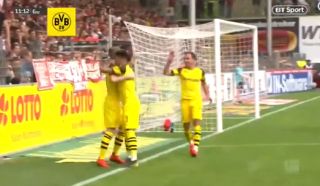 It was a miserable day for Manchester United as they got thrashed 4-0 by Everton, but one of their top targets Jadon Sancho continues to show why he’s being linked with the Red Devils.

The Independent have recently claimed Sancho is seen as an ideal replacement for Alexis Sanchez at Old Trafford, and it seems painfully clear that the club need more quality in their side after today’s heavy defeat.

Jadon Sancho on the end of a beautiful free-flowing move from Borussia Dortmund. ?? pic.twitter.com/UTeAl8Tr9Y

Watch the Sancho goal video above as the young England international broke into the box superbly, showing great awareness, positioning and then finishing ability to score for Borussia Dortmund.

United fans will hope it’s not too much longer now before Sancho can make his way to United and turn their fortunes around next season.