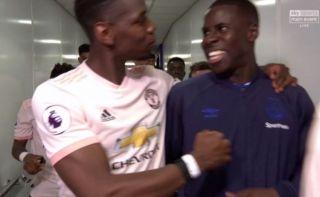 Unsurprisingly, the image above is now doing the rounds on social media, with many fans justifiably a bit peeved at seeing their star player being so casual with an opponent ahead of a big game.

Pogba has often been criticised for not being focused or serious enough, despite his obvious talents, and incidents like this will leave a bad taste once again.

United have been battered by Everton at Goodison Park today, and could perhaps have done with players like Pogba playing with a bit more fire in the belly.

Pogba hugging and laughing with Zouma in the tunnel ????

I hate the modern game.

Pogba playing grab ass with Kurt Zouma on the way out the tunnel. Love that ? #EVEMUN

Pogba and Zouma in the tunnel? #evertonvsmanchesterunited