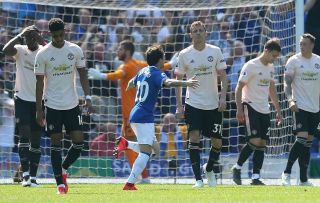 Manchester United midfielder Scott McTominay was apparently too distraught to even conduct a post-match interview after today’s 4-0 defeat away to Everton.

The Red Devils were utterly humiliated at Goodison Park, with goals from Richarlison, Gylfi Sigurdsson, Lucas Digne and Theo Walcott finishing them off.

MORE: Manchester United do something they haven’t done in 38 years with Everton humiliation

It was one of United’s worst results for a long time, and certainly the lowest point of what has mostly been a very positive reign so far under Ole Gunnar Solskjaer.

McTominay seemed to sum up the mood today as he seemed too distraught to even speak after this thrashing, according to a tweet from journalist Tyrone Marshall.

Asked Scott McTominay for a word on his way out past the mixed zone. "No, I just can't" he said with a pained expression that suggested he never wanted to speak about that again. One of the few (only?) players to escape with any credit from that humiliation #mufc

Marshall says the Scotland international simply said “No, I just can’t” with a ‘pained’ expression when asked if he could have a quick word about the game.

This certainly looks like a moment for this MUFC squad to take a look at themselves, and fans will at least be glad to see some of this squad care about the nature of that result and performance.

Video: Cristiano Ronaldo gets his goal with a clinical finish to seal Juventus win over Sampdoria
More Stories Scott McTominay