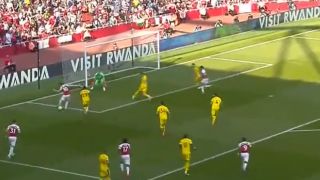 Mesut Ozil has produced a sublime finish to make it Arsenal 1-1 Crystal Palace in today’s Premier League clash at the Emirates Stadium.

After a poor first half showing from the Gunners, it didn’t take them too long to get in front in the second period as Ozil poked home an equaliser from a tight angle.

Watch the Ozil goal video in the clip above as the German playmaker is found cleverly by Alexandre Lacazette before somehow sneaking his shot in from what looks a very difficult angle.

Game on at the Emirates!