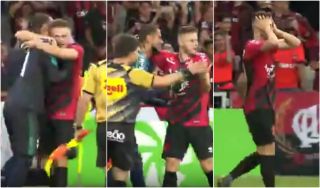 A Brazilian footballer has been spotted celebrating a penalty shoot-out win before his team had actually won.

Watch the video below as this guy runs up to celebrate and congratulate his goalkeeper on a fine save from one spot-kick, only to be sent back with the rest of his team-mates by the referee.

Turns out this guy didn’t do his maths right and work out there were still more penalties to come.

According to Reddit, his team did at least end up winning the shoot-out in the end!