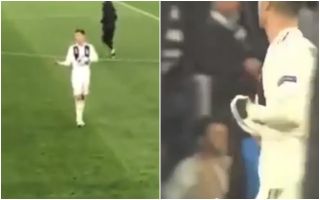 Juventus superstar Cristiano Ronaldo did not look a happy man as his side were dumped out of the Champions League by Ajax last week.

The Portugal international won the competition four times in his final five years at Real Madrid, as well as once in his time as a Manchester United player.

Juventus will have hoped signing Ronaldo could help them finally get their hands on the trophy after some near-misses in recent times, but it wasn’t to be as they were well beaten at home by Ajax.

In typical fashion, Ronaldo still seemed to make himself the centre of attention as he appeared to accuse his team-mates of s**tting themselves.

Watch the video below as the 34-year-old can be seen lifting his shirt and gesturing towards his backside.

Make of that what you will, but the message seems fairly clear, and in keeping with what Ronaldo might do in response to a disappointing defeat!