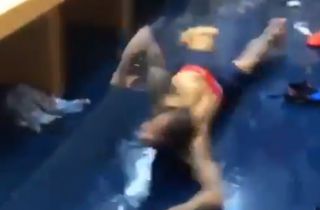 Paris Saint-Germain star Dani Alves has picked up yet another trophy to add to his impressive collection, so of course he had to celebrate in style afterwards!

Watch the amusing video below as the veteran Brazilian defender goes for a little swim on the floor of the PSG changing rooms, in what seems to be water being poured from buckets by his team-mates.

Dani Alves showing how Neymar does it on a fieldpic.twitter.com/ZjUnCrDN0v

As noted by Troll Football above, it’s also a decent homage to the diving of his team-mate Neymar, though we assume not an intentional one…

PSG’s Ligue 1 win was sealed by results elsewhere in the French top flight yesterday, before Thomas Tuchel’s side put the icing on the cake with a 3-1 win over Monaco.