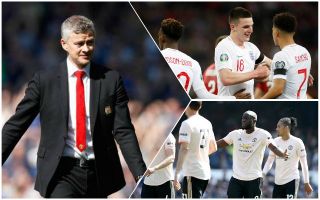 It’s fair to say Ole Gunnar Solskjaer has his work cut out for him at Manchester United after a shocking 4-0 defeat at the hands of Everton this weekend.

While the new Red Devils manager has done a decent job to steady the ship after a nightmare start to the season under Jose Mourinho, it seems the problems at the club weren’t all the Portuguese’s fault.

Solskjaer now needs the backing to totally revamp this squad, with a number of new signings needed and sales also required of some under-performers who’ve somehow stuck around for far too long.

Here’s our look at ten names we think should or will be shown the door, along with six new additions to turn this team into more genuine title contenders next season…

What more is there to say about this guy? Alexis Sanchez will go down as one of the biggest flops in living memory, only to be saved by the fact that he didn’t actually cost Man Utd a mammoth transfer fee due to his contract situation at Arsenal. If he stays beyond this season it would be a huge, huge surprise.

Probably already on his way out, BBC Sport have reported that Ander Herrera has agreed a deal to join Paris Saint-Germain on a free transfer. A bit of a blow, but perhaps also an opportunity to move on and bring in someone closer to world class level.

It never really happened for Juan Mata at United, and he’s another player nearing the end of his contract at Old Trafford now, with the chance of a renewal looking less likely by the day as he barely features for the first-team anymore.

This would be a big call, but may be worth it due to David de Gea’s contract situation and current loss of form.

According to the Times, the Spanish goalkeeper is demanding big money to commit his future to the Red Devils, and it’s questionable right now if that would really be worth it.

If De Gea continues to decline as he has this season, this could be United’s last chance to cash in on him while his stock remains relatively high. He’s been a legendary performer for the club, but this seems like a logical time to say goodbye.