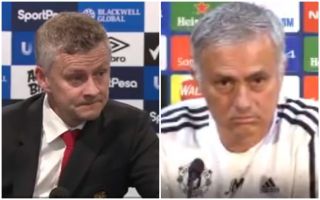 Manchester United fans did not show a great deal of love towards Jose Mourinho towards the end of his time with the club, but it looks like he might have had a point about one or two things.

The Portuguese was sacked in December and replaced by club legend Ole Gunnar Solskjaer, who, despite a fast start, is now finding life at Old Trafford a little tricky as well.

United were battered 4-0 by Everton at the weekend, and fan-run Twitter account United Xtra has noted how similar Solskjaer’s comments on some of the club’s players are to those made by Mourinho earlier this season.

Take a look at the clips below and decide for yourselves, but it certainly seems like the Norwegian is fast realising that there really may be a bit of a problem with the character of some of those inside the United dressing room…

Solskjaer has done a fine job in difficult circumstances at United, but it still seems clear a lot needs to change if the team is to be more competitive next season.

Losing 4-0 to Everton is far from good enough, with the Red Devils now conceding more goals than ever before in a single Premier League campaign, with their top four hopes now in real jeopardy.