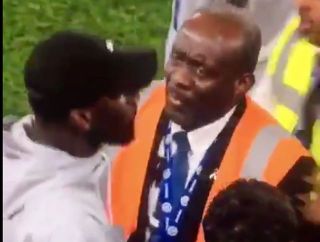 After Chelsea were held to a 2-2 draw by Burnley on Monday night, the tension appeared to boil over after the full-time whistle.

The Blues fell behind early on but came storming back with two quick goals from N’Golo Kante and Gonzalo Higuain to go ahead.

However, Burnley pegged them back and returned home with a point which all but secures their Premier League status for another year, while it was a huge blow for Chelsea given their aspirations of finishing in the top four this season.

Tempers certainly flared in the latter stages as Maurizio Sarri was sent off, while there was a late clash on the pitch too involving Mateo Kovacic.

It appears as though the issues rumbled on even after the full-time whistle, as seen in the video below, as Rudiger had to be held back by a steward and a member of the Chelsea coaching staff as he appeared to try and get closer to someone from the Burnley camp.

It’s unclear as to what sparked the angry reaction from the German international, but it’s fair to say that he wasn’t impressed and was keen to speak with someone in particular before making his way down the tunnel.

Fortunately though, they were kept apart and the situation eventually fizzled out as Chelsea will now look ahead to their crunch clash with Manchester United at the weekend.