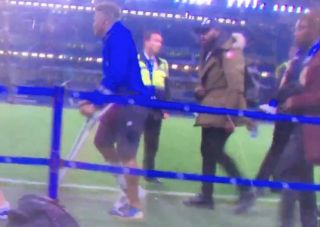 Chelsea were handed bad news on Monday night as Callum Hudson-Odoi was ruled out for the rest of the season with a ruptured Achilles.

The 18-year-old sustained the injury in the closing stages of the first half against Burnley at Stamford Bridge, as after he slumped to the floor, he was helped off the pitch by the Chelsea medical staff before heading straight down the tunnel.

SEE MORE: Video: Gonzalo Higuain fumes with decision to sub him off during Chelsea draw

While it was disappointing enough for the Blues that they were held by Burnley in a 2-2 draw which was a blow for their top four aspirations this season, they were dealt even more bad news after the game.

As seen in the video below, Hudson-Odoi was seen walking with crutches and with a protective boot on his injured foot, while the England international took to social media himself to confirm his injury and that he will now begin to work ahead of his return next season.

It’s undoubtedly a huge blow for him too having recently featured more consistently in Maurizio Sarri’s line-up, while he’s managed six goals and seven assists in 28 appearances at both youth and senior level.

Unfortunately for him though, he’ll now go through a lengthy rehabilitation process, and it’s hoped that he can make a swift and full recovery to continue to build on the promise and potential that he has shown to this point for both Chelsea and England.

Really gutted to end my season with an Ruptured Achilles, gotta work hard and try and come back stronger for next season!!!????? pic.twitter.com/PXC53WszdH

CL giants back in for potential transfer of Chelsea star