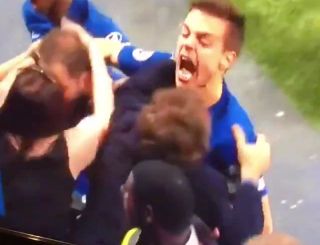 Gonzalo Higuain scored a superb goal for Chelsea in their clash with Burnley on Monday night, but his celebration also managed to cause a stir.

The two teams bagged four goals between them in the opening 24 minutes at Stamford Bridge, as they went into the half-time break locked at 2-2 in a thrilling encounter.

After Burnley stunned Chelsea by taking an early lead, N’Golo Kante and Higuain turned things around a with a quick-fire double salvo, as the Argentine produced a world-class finish.

However, it wasn’t just the finish that viewers were talking about, as seen in the tweets below as one fan appeared to be a little over eager to celebrate with the Chelsea striker as his head managed to disappear out of view.

After conceding again despite turning the game on its head, Chelsea will be hoping that Higuain can fire them to a crucial victory as a win would move them back into third place in the Premier League table.

That Higuain’s celebration, what was he looking for in that woman’s chest?????

Higuain went to suck boobs in that goal celebration

That boob celebration by Higuain though ??

did that lady just put Higuain inside her boobs during celebration?

Higuain got himself a big fill of that woman’s chest plus a feel after that last goal. Nice celebration wonder what her old man thinks

Today’s celebration by Higuain was very sexual. The position was very cozy. I wish I were the one in that position. Life sweet sha!