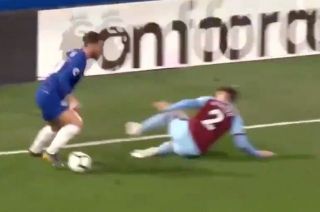 Chelsea were held to a disappointing 2-2 draw by Burnley on Monday night, but Eden Hazard was in fine form once again as he was key in the first half.

The Blues had the chance to go up to third place in the Premier League table after their rivals slipped up in the race for Champions League qualification over the weekend.

However they were unable to take full advantage as although they move back into the top four, they’ve now played a game more and risk seeing themselves drop back out later this week.

Nevertheless, both their goals were classy efforts with N’Golo Kante and Gonzalo Higuain getting on the scoresheet to put them ahead before Burnley pegged them back.

As seen in the video below though, Hazard was in dazzling form early on as he caused Matt Lowton all sorts of problems and eventually dropped him before providing an assist for Kante.

It’s all well and good producing the skills and exciting the crowd, but the fact is that Hazard has the end product to match it and that’s why he has been so crucial to Chelsea again this season.

Time will tell though if he is able to lead them to a top four finish as things continue to remain finely poised in that particular race, while the tweet below notes that the Belgian international has been involved in 49% of Chelsea’s goals this season, a hugely impressive figure to show his influence.

Eden Hazard has contributed to 49% of Chelsea's goals this season.