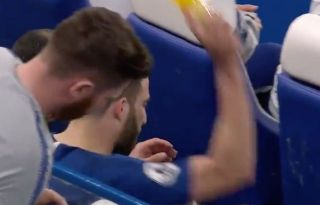 Gonzalo Higuain scored a stunning goal for Chelsea against Burnley, but his night ended on a sour note as the Blues were held in a 2-2 draw.

The Argentine was on the mark in the first half at Stamford Bridge, as he produced a quality finish to put Chelsea 2-1 up, only for the hosts to concede just minutes later.

Having dropped points in the crucial race for a top-four finish in the Premier League this season, it was a bad night for Chelsea, and Higuain was clearly feeling frustrated as he was replaced by Olivier Giroud in the latter stages.

As seen in the video below, the 31-year-old was seen muttering to those around him as he showed discontent with the decision to take him off, before he threw his bib and a bottle away in anger as he was evidently disappointed to come off at a key point in the game.

Giroud has been in fine form this season, mainly when getting a chance by Sarri to impress in the Europa League, but he was unable to make his mark on the game as Chelsea dropped points and had a furious Higuain on the bench left very upset with not being able to finish the encounter.

The 31-year-old has managed just four goals in 11 Premier League games since joining the Blues in January.

Gonzalo Higuaín throws bottle after being subbed off against Burnley https://t.co/VG5OSQaNJn