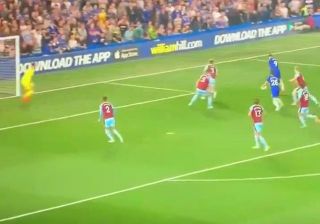 Chelsea fell behind to Burnley on Monday night, but they were behind for a matter of minutes as they came storming back to take the lead.

Jeff Hendrick silenced Stamford Bridge with a classy finish to put the visitors ahead after just seven minutes, but their joy was short-lived as it merely sparked an emphatic Chelsea response.

After some wonderful play from Eden Hazard down the left flank, the ball found its way to N’Golo Kante to smash home an equaliser for the Blues, as seen in the video below.

Chelsea were evidently buoyed by that as just moments later, Gonzalo Higuain produced some magic of his own to get himself free in the box before producing a world-class finish to turn things around.

Three goals in six minutes ensured that there was a thrilling start to the encounter on Monday night, with Chelsea desperate to secure all three points as they look to take advantage of their rivals slipping up in the battle for a top-four finish in the Premier League.

Higuain fires in a bullet off the bar from the right-hand side of the penalty area to give #CFC the lead!