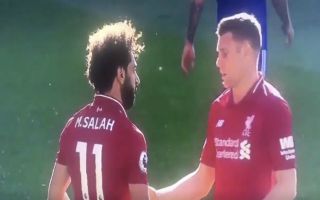 Liverpool striker Mohamed Salah couldn’t hide his frustration after James Milner stuck to his duties from the penalty spot against Cardiff City on Sunday.

The Reds secured a vital 2-0 victory in Wales over the weekend which saw them return to the Premier League summit, thanks to a Georginio Wijnaldum strike and Milner’s late penalty kick.

Jurgen Klopp’s men were facing a nervy last ten minutes before the referee awarded a spot-kick in controversial fashion after Sean Morrison was judged to have pulled Salah’s shirt in the box.

Milner dispatched his effort from 12 yards calmly, but Salah’s angry reaction when he snatched the ball away from him to take the kick caused a stir among the travelling supporters.

The Egyptian is chasing the Golden Boot again this season and he could have pulled clear of Manchester City’s Sergio Aguero on 20 goals if he’d scored in the match, but Milner is Liverpool’s regular penalty taker and he stuck to his guns admirably.

Check out the tense moment between the two teammates below, via Twitter.

Yes Milner is number one for penalty kicks but Salah wanted to be the league’s top scorer and we’re ahead and it will increase his confidence. I really feel bad for Mo! pic.twitter.com/XCoDa0PjPO

Did Salah celebrate after Milner scored the penalty!!!

What would you do if you were instead of Salah???