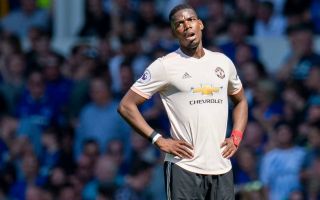 Man Utd fell to a humiliating 4-0 defeat to Everton on Sunday in what was a huge blow to their hopes of securing Champions League qualification.

The Red Devils are undoubtedly in a slump currently, having lost six of their last eight games across all competitions.

SEE MORE: Manchester United star tells his agent to get him mammoth contract in transfer talks with CL giants

This latest damaging defeat leaves them in sixth place in the Premier League table, two points adrift of fourth place with just four games to go as they must now produce a response against rivals Manchester City in midweek.

While the result in itself was a huge setback for the club, the manner of the defeat and the performance that the team produced also led to intense criticism and scrutiny from pundits and fans alike, and Pogba has conceded that the players are fully aware of that and are focused on producing a positive reaction.

“The way we played and the performance of myself, of the team, of everyone is disrespectful. We didn’t respect ourselves, the club or the fans,” he told Sky Sports.

“What we did on the pitch is not respectful for the team-mates, for the staff, for the people, for the kitman, for everyone. For their work, they put their life on us, the team and this club.

“I want to say [to the fans], and I know it may not be enough, but the fans want a reaction from the players and the only way to apologise to them is to give everything on the pitch, do our best, create chances, score goals, defend, work for the team and we can even lose games, but with a good performance and pride on the pitch.

“That’s how we should apologise to the fans, just to give everything for us, for the club, for the shirt, for the team-mates and for ourselves as well because it is us on the pitch and we cannot perform like we did.”

Time will tell if they can bounce back as the Old Trafford faithful will be expecting a committed and determined display against City, who must win in order to stay ahead of title rivals Liverpool in the standings.

In turn, it promises to be a fascinating encounter between the two Manchester giants, and based on what Pogba’s had to say above, United are fully aware of what they must now do to not only win the fans over again but to keep their Champions League hopes alive.

United undoubtedly improved for a lengthy period after Ole Gunnar Solskjaer arrived as interim boss following Jose Mourinho’s departure, but the struggles are back it seems and they must now show consistency in the final few games to salvage something from their season.