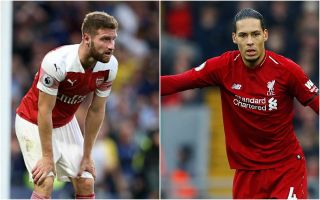 One Arsenal fan has seemed to genuinely try to argue that flop defender Shkodran Mustafi is better than Liverpool star Virgil van Dijk.

The Germany international is widely viewed as one of Arsenal’s worst signings of recent times, having had another absolute nightmare of a performance in the 3-2 home defeat to Crystal Palace at the weekend.

Mustafi looked decent at former club Valencia and started well at the Emirates Stadium, but it’s fair to say his career has gone majorly downhill in the last couple of years.

So is there really any argument he’s superior to Van Dijk, one of the best centre-backs in the world and a potential PFA Player of the Year winner?

Unpopular opinion, but Mustafi is having a better season than Van Dijk

This Arsenal fan, Chris, seems to think so, as he puts out some stats suggesting Mustafi is having both the better season this term, and the better career overall.

Above, Chris tweets that Mustafi has made more tackles, has a better tackle success rate, and made more interceptions this season.

Assuming these stats are true, we doubt they tell the whole story, with things like errors leading to goals left out.

Arsenal also probably have more defending to do than Liverpool, who tend to dominate the ball better, whereas the Gunners have often allowed teams to dominate them this season.

Mustafi is also having a more successful career than Van Dijk

It also seems silly to point to Mustafi’s World Cup triumph as something to boast about against Van Dijk, given that the 27-year-old initially failed to make the squad and only came in to replace the injured Marco Reus, before then barely featuring in their successful campaign.

Even though there’s surely no debate to be had here, we’ll put it to you – are Chris’ arguments at all convincing?