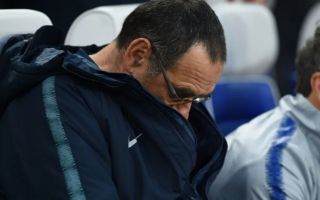 According to ESPN, a number of sources state that someone on the Burnley bench repeatedly called Sarri a ‘s**t Italian’ prior to the Blues boss losing his cool and ultimately getting himself sent off in the game at Stamford Bridge.

MORE: Video: Bad news for Chelsea, star on crutches after confirming season is over due to injury

It was a difficult evening for Chelsea as they were held 2-2 at home by Sean Dyche’s side, and things got worse as the Guardian report they reported Burnley’s behaviour to referee Kevin Friend.

Sarri later snubbed media duties, with his assistant Gianfranco Zola meeting the press instead and admitting that his manager was frustrated.

“He’s very frustrated, so he’d prefer not to come over here,” Zola was quoted by ESPN.

“He’s been sent off. I think he’s been offended as well, so he didn’t feel it was the right thing to do, to speak to you.

“I think he’s been told something from their bench, but don’t ask me exactly what. I don’t want to go down that line, but we’ll see what we can do about that.”

While Chelsea fans have long been critical of Sarri’s handling of the team this season, they will surely support the Italian tactician here as it sounds like he was rather harshly wound up with potentially offensive words by members of the Clarets’ backroom team.