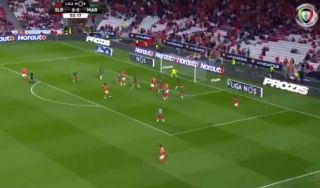 Benfica wonderkid Joao Felix scored a beauty in his club’s big win over Maritimo, with a strike that looked eerily similar to that of Georginio Wijnaldum for Liverpool against Cardiff at the weekend.

Watch below as Felix latches on to a low corner to smash the ball into the back of the net with a well-taken powerful effort.

Look familiar? That’s because Wijnaldum scored almost an identical one for Liverpool over the weekend as well, with the Netherlands international hammering home a well-worked set-play delivered low by Trent Alexander-Arnold.

Felix looks one of the most exciting young talents in world football right now, but perhaps he’s simply learning everything he knows by watching Liverpool in action!