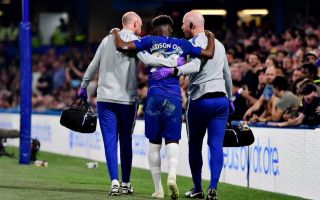 Chelsea starlet Callum Hudson-Odoi dropped something of a hint over his future in a tweet last night after he had to go off injured against Burnley.

It looks like a bad one for the young England international, who suggested in his tweet that his season is over after this knock.

However, on a more positive note, as Hudson-Odoi posted this image and tweeted about his injury, he subtly suggested that he’d now be working hard to get back in action for Chelsea next season.

Really gutted to end my season with an Ruptured Achilles, gotta work hard and try and come back stronger for next season!!!????? pic.twitter.com/PXC53WszdH

This follows plenty of speculation linking the 18-year-old with a move away from Stamford Bridge, with Kicker linking him with Liverpool, Sport Bild linking him with Bayern Munich, and the Daily Star claiming he’s a target for Manchester United.

Chelsea fans would hate to lose this popular home-grown player, with Hudson-Odoi looking one of the most exciting talents in the country after this fine breakthrough campaign.

They’ll be hoping this tweet is something of a hint that this won’t be the last they see of him in a Chelsea shirt.