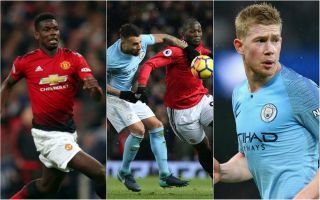 Ahead of Wednesday night’s Manchester Derby between Man Utd and Man City, we thought we’d take a look at the huge amount of money spent by these clubs in recent times.

Many point the finger at Pep Guardiola for only knowing how to win big when he has gazillions to spend, while others point at United as a perfect example of how money can’t buy everything.

MORE: 10 out, 6 in: How Solskjaer must rebuild Man Utd this summer, including bold move to replace big name and double PL transfer raid

Both have been among the biggest spenders in the transfer market in recent times, but it’s only City challenging for major honours right now as they chase a second Premier League title in a row and a possible domestic treble this season.

MUFC, meanwhile, are scrapping it out for a top four spot and, after losing 4-0 at Everton in their last game, don’t look particularly likely to be successful in that scrap.

So, where did it go so right for City and so wrong for United? Here’s a look at each club’s top ten most expensive signings ever, many of whom are still involved at both clubs, in a bid to gain a bit of an insight…

Not an easy call to make, but for £89million, the most expensive signing in Premier League history, Paul Pogba hasn’t done enough.

The France international has shown flashes of real brilliance, but mainly only for the first few months of Ole Gunnar Solskjaer’s reign, and in recent games he’s looked more like the Pogba we saw under Jose Mourinho.

Paul Pogba has not looked worth the money for Manchester United

Not as expensive as Pogba, but City’s record signing Riyad Mahrez has barely made any impact in his first season at the Etihad Stadium.

It remains to be seen if the Algerian can turn things around, but he may not get the chance as the Daily Mail already report that he’s unsettled and threatening to quit the club.

A promising start never really went any further, with Romelu Lukaku managing just 42 goals in 94 games for Man Utd – not the numbers of a £75m striker.

Such is his demise, there’s every chance he’ll only be on the bench for the visit of City to Old Trafford this Wednesday night.

A few eyebrows were raised when City splashed out £57m on uncapped French defender Aymeric Laporte, but he’s looked a solid purchase.

The 24-year-old already has a Premier League title and two Carabao Cup wins under his belt in his brief time in England, and he’ll surely add to that.

One of the biggest flops in living memory, Angel Di Maria looked a fairly safe investment at around £59.7m in the summer of 2014, but he lasted just one hugely underwhelming season at Old Trafford.

The Argentine is now at Paris Saint-Germain and looking far more comfortable in the rather less competitive Ligue 1.

Only slightly less expensive than Di Maria, but a great deal better, we’ve made the uncontroversial choice of labelling Kevin De Bruyne as a hit.

The Belgium international has been instrumental to City’s success since he joined the club, and the Sun‘s report that he’s going to be injured for the title run-in is a huge blow for Pep Guardiola.

What a waste of money it looks like Fred has been. It’s only the Brazilian midfielder’s first season in England, but at £47m, it’s hard to see why United bothered.

For £49m, City looked like getting themselves a world class left-back, but he’s spent more time injured and on Twitter than really contributing much on the pitch.

A classic Jose Mourinho signing, United splashed out £40m on an ageing Nemanja Matic and it’s worked out just as you’d expect, with the Serbian now looking badly off the pace, particularly in his nightmare performance in the 4-0 defeat at Everton.

He’s far from the perfect player, but Kyle Walker was a top performer at Tottenham and has continued to show his ability at Man City, looking a decent use of £48m.

(Transfer fees for City and United via Wikipedia)