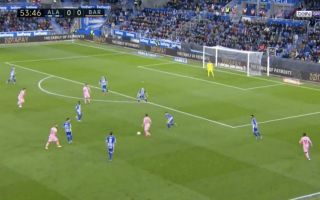 Carles Alena opened the scoring for Barcelona against Deportivo Alaves on Tuesday night, firing home after a wonderful passing move from the visitors.

The Blaugrana are in action against Alaves at Mendizorrotza Stadium this evening, knowing that a win will take them one step closer to retaining their La Liga crown.

After a tense opening 45 minutes, Ernesto Valverde’s side took the lead in the contest thanks Alena’s effort in the 53rd minute, as he finished off a sublime move which also included a clever Luis Suarez dummy from a Sergi Roberto pass.

When Barcelona string quick passes together in this manner they are almost impossible to stop and Alena showed a clinical edge when it mattered to cap a rare appearance in the starting line up.

Yes Aleñá, what a goal! Deserves that, had an excellent game. Him and Puig are so good to watch, whatever level they’re playing at.pic.twitter.com/8gufgqGOLP

Lovely combination of passes leading up to the goal before Carles Alena strikes ? pic.twitter.com/yKByYE80IA