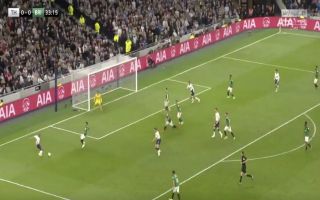 Brighton defender Lewis Dunk pulled off a superb clearance to prevent Tottenham taking the lead in a Premier League clash on Tuesday night.

The two sides are currently facing off at the Tottenham Hotspur Stadium, with the scores locked at 0-0 after an hour of highly competitive action in north London.

The closest either side has come to an opener was 33 minutes into the match, when Lucas Moura found himself in space just inside the box before firing the ball towards the far corner of the Brighton net.

The Brazilian’s effort might not have ended up hitting the target, but Dele Alli was following in to score if not and Dunk’s heroics were necessary to keep the scores level.

The Brighton centre-back denied Lucas with an incredible goalmouth clearance as he was running back towards the goal, which keeps his team in the hunt for a vital point at the bottom of the Premier league table.

The @OfficialBHAFC defender is sprinting towards his own goal but somehow diverts Lucas Moura’s effort away from goal! ?