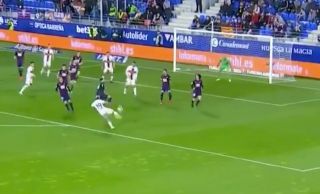 Huesca were in La Liga action on Tuesday night as they hosted Eibar looking to keep their hopes of avoiding relegation alive with a crucial win.

The Spanish outfit started the night in 19th place in the standings, eight points adrift of safety as they look set for the drop this season.

However, they are seemingly ready to go down with a fight as after Enric Gallego gave them a lead just after half-time, Ezequiel ‘Chimy’ Avila produced this sensational strike just minutes later to double their advantage.

As seen in the video below, it was a well-worked goal to find him in space on the edge of the box from the corner, but the finish was absolutely stunning as he volleyed it first-time into the back of the net at a ferocious pace to spark wild scenes of celebrations.

It should be a contender for goal of the season for Avila, but more importantly, Huesca will be five points adrift of safety ahead of Levante’s clash with Real Betis on Wednesday night as they could yet mount a late charge for survival.

An OUTRAGEOUS volley… what a goal from Chimy Avila!! ? pic.twitter.com/quLORkUcTc