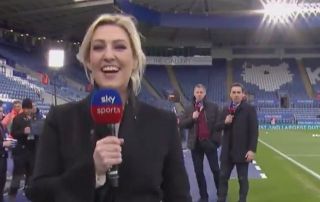 After a rather awkward segment on Sky Sports not so long ago, presenter Kelly Cates got her own back on Gary Neville and Jamie Carragher.

As seen in the first video below, viewers were left baffled after the two pundits walked away following a question from Cates, as she could still be seen in the background watching them walk off.

There was a point to it as the pair were off to interview Southampton boss Ralph Hasenhuttl, but the way in which the segment was done did make it look as though they were rudely walking off and leaving her behind.

Credit to Sky Sports and Cates for this though, as they cheekily filmed her doing the same to her colleagues in a promo for the Manchester derby this week.

As seen in the video below, Neville asks Cates for a reminder as to when Man Utd host Man City, and she manages to just about keep a straight face and deliver a cheeky dig at them as it appears as though they’ve all had a good laugh at the previously awkward scenario.

Kelly Cates getting her own back on @Carra23 & @GNev2 ??? pic.twitter.com/ccI0oX5XCE