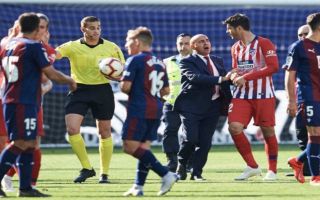 Diego Simeone’s side secured a hard-fought 1-0 win away at Eibar over the weekend, thanks to a late strike from Thomas Lemar.

The result ensured that Atletico stayed four points clear of Real Madrid in second place in the table, but the result was overshadowed by the actions of the referee.

According to Talk Sport, Javier Alberola Rojas has been hit with a two-match ban after clipping Morata around the neck, which sent the Spaniard into a fit of rage.

The 26-year-old, who is currently on loan at Atletico from Chelsea until the end of the season, tried to approach the match official after the skirmish but his team-mates held him back and Simeone defended his striker following the game.

As per Talk Sport, The Argentine boss stated: “Morata was not happy. In fact, he was annoyed.

“That action reminded me when I was banned for four games when I did something similar to the fourth official.”

Rojas has maintained his innocence since the event, but the Spanish FA have decided not to select him for the next two rounds of La Liga matches.

As you can see in the clip below via Twitter, Morata was visibly distressed by the referee touching his neck and proceeded to angrily confront him in the final stages of the contest against Eibar.

Diego Simeone: “I did that to an official & got a four-game ban.”

Morata has scored five goals in 11 domestic appearances for Atletico since his six-month loan switch from Chelsea, filling in as the club’s main striker while Diego Costa serves a ban.

He will hope he doesn’t have to deal with Rojas again any time soon, but the Spanish official will surely think twice before laying his hands on a player again. 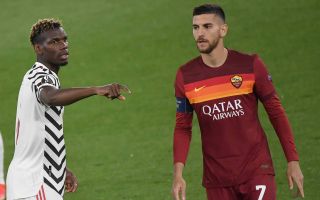