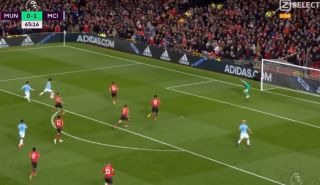 Leroy Sane has scored to make it 2-0 to Manchester City away at Manchester United this evening with a goal that won’t make Liverpool fans too happy.

The Reds could really have done with their old rivals United doing them a favour in the title race tonight, but it looks like this game is surely heading City’s way.

David de Gea won’t be too pleased either as he let Sane’s shot slip through him – a shocker by his high standards.

It’s not been the most convincing season from the MUFC goalkeeper, and he surely has to take the blame here for a sloppy error at a big moment in this game and possibly this season.

Aside from the title race, Man Utd badly needed a response tonight after being thrashed by Everton as the top four looks to be slipping away from them.